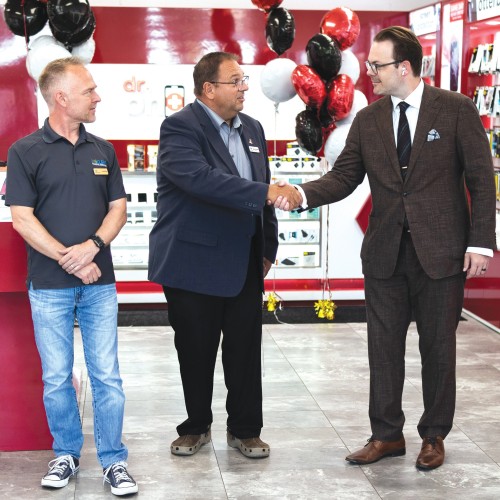 Dr. Phone Fix, headquartered in Edmonton, is among the country's largest rising cell phone and device repair shops. It officially opened its gates to Border City customers on Tuesday morning with something like a ribbon-cut ceremony. Shaun Merriman, the company's CFO, was greeted by Mayor Gerald Aalbers and Lloydminster Chamber chairman Jody Herbus for the ceremonial grand opening and stated that Dr. Phone Fix is delighted to enter this new market.

We offer three distinct revenue sources, which are repairs, verified pre-owned devices, as well as accessories. Merriman noted that Dr. Phone Fix differentiates itself from the competition by stocking repair supplies. Our stock and supply chain are exceptionally competitive in that they allow us to have goods on hand for the most common repairs, allowing us to turn fixes around quickly.

People now maintain their phones for slightly more than three years, as compared to model changes practically every year. As a result, if a recession occurs, consumers will buy used phones rather than new ones.

As part of a nationwide rollout, political and business leaders came together for a ribbon-cutting ceremony to inaugurate Dr. Phone Fix's 20th Alberta location in Red Deer. For the official ribbon-cu...

On December 31, 2022, in EDMONTON, ALBERTA CANADA, Dr. Phone Fix continued to open its stores quickly, planning to arrive at a total of 200 stores and 425 personnel. This month, they opened new locati...